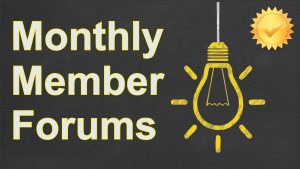 The E's of Libraries®: Education, Employment, Entrepreneurship, Empowerment, and Engagement

During a "lightning round" session, speakers will field questions from registrants. Submit a question in the registration form.

Due to time limitations, not all questions will be answered live. Attendees will receive a list of suggested resources for the presented in-depth scenarios, and the types of questions submitted with this registration form.

Marie Ciepiela has served as the Executive Director of the Friends of the San Francisco Public Library since 2016, leading the private, community-based side of a partnership for excellence with the public library. Since arriving in San Francisco in 1990, she has served as an executive leader of three nonprofit organizations, including the Housing Rights Committee of San Francisco; the OMIE (Oceanview, Merced, Ingleside, Excelsior) Beacon Center; and the Youth Service Bureaus, the mental health department of the YMCA of San Francisco. She holds a California Teaching credential, a Master's degree from the University of California at Davis, and a Bachelor's degree in history from Harvard University.

Clare Membiela serves as the Library Law Consultant at the Library of Michigan, helping public libraries understand and manage legal issues that impact library services. Before joining the Library of Michigan in 2016, Clare was the Associate Director for Library and Instructional Support for the WMU Cooley Law School Libraries. She has an M.L.S. from Southern Connecticut State University, a J.D. from the University of Miami, and 30 years of law library experience.

Ari Z. Brooks is Executive Director of the Friends of the Montgomery County Library in Maryland. An experienced fundraiser and nonprofit manager, she has held leadership positions in three not-for-profit organizations for twenty-five years in Maryland and Pennsylvania. Ms. Brooks earned a Bachelor’s degree from the University of Virginia and a Master’s degree in Social Work from the University of Pennsylvania. She is a graduate of the 2004 Class of Leadership Montgomery and the inaugural 2009 recipient of the Emerging Leader Award for the County Executive’s Awards for Excellence in the Arts and Humanities.

Shirley Bruursema is chair of the Kent District Library Board of Trustees in Michigan. She was the recipient of the ALA Trustee Citation in 2009. Bruursema has been a delegate for the White House Conference on Libraries. She was treasurer and co-chair of millage campaigns that continued the Kent District Library’s service to 26 communities and 18 libraries. Bruursema has been dubbed the “Millage Queen” for her work coaching libraries through millage campaigns, helping with efforts to pass more than 80 millage elections since 2000.